In 1998, the US declared April 6th to be National Tartan Day, and Canada followed suit in 2010. The date honours the anniversary of the signing of the Declaration of Arbroath (Scotland’s declaration of independence), which happened on April 6th in 1320. Many believe that document heavily influenced the American Declaration of Independence document, but that’s another story.

Let’s bring it back to National Tartan Day! What does that mean? Bust our your bagpipes and grill up some haggis, because we have an excuse to wear plaid!!

Here’s the scoop: In short, TARTAN IS A PATTERN AND PLAID IS A GARMENT.

Tartan is a specific pattern or print when stripes of one colour in varying sizes intersect at 90-degrees with stripes of another colour in varying sizes, creating a cross-cross checkered-type pattern. Plaid is the Gaelic word for blanket, and it refers to lengths of fabric and shawls worn in traditional Scottish dress. Today’s, the word plaid is associated with any garment worn in highland dress, no matter what the print, pattern, or colour is.

Well, now you know! And here’s more to know…
– The Scottish phrase “Sewn wi’ a hate needle an’ a burnin’ threed” is what you’d say in reference to a garment that’s made poorly.
– The Maple Leaf Tartan (below left) was declared Canada’s national tartan on March 9, 2011. 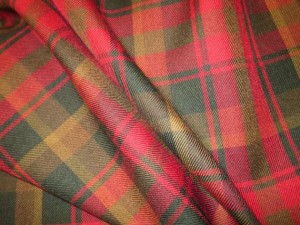 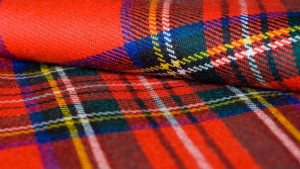 Use A Rotary Cutter For Paper Patterns (Video)

What To Look For When Choosing Sewing Shears (Video)

Cutting Your Fabric Before Sewing: Tools and Techniques (Video)